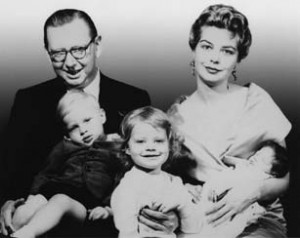 This website offers a cornucopia of Cy Walter musical materials and memorabilia, as retained by Cy Walter’s family, and structured to allow visitors with diverse interests to locate those items of particular interest to them.  Accordingly, if you are yourself a musician, seeking Cy’s wonderful arrangements and compositions in either sheet music or recorded form, these may be readily found under their respective chapter headings.  Or, should you be a student of musical history, and so more interested in the documentary or pictorial images of the era of which Cy was such a vibrant part, you may wish to turn to the sections offering photographs, correspondence, Cy’s mailing list, articles, literary references, and the like.

As Cy Walter’s son, I have worked to organize, preserve, and archive the fascinating materials relating to Cy Walter’s career which were so presciently saved by my mother and Cy’s widow, Cam.  In  undertaking this task, one thing quickly became apparent.  This was the reality that the sharing of these treasures with those persons who knew (or knew of) Cy, and also with those who did not (but would nonetheless enjoy them), was no simple task.  Launching this site has become a viable alternative to distribution by word‑of‑mouth which will, I hope, result in ready access to these materials for all who would enjoy them.  Many of the materials we have are now offered here, but as time permits more will be added.  Thus, this site will continue to be a growing and changing proposition.  Feedback and contributions are also welcome (whether in the form of historical insights, memories, or the sharing of relevant materials).  However, despite the site’s “.com” designation, this effort is entirely non-profit.

I owe a debt of deep personal gratitude to  Michael Feinstein, performer and historical archivist extraordinaire.  Michael’s gracious support and  encouragement have fueled my energies in pursuing this project, but more importantly, about twenty years ago, he made outreach to my mother, Cam Walter.  Michael inquired of Cam as to what materials of Cy’s music might still be in her possession, suggesting that Cy’s sheet music would be best filed with the Library of Congress where musicians and historians could find it.  Although Cam did not then act on Michael’s sage suggestion, a decade or so ago she mentioned it to me, tasking me with carrying it out,  and so my path into exploring my father’s musical legacy began. From that path has also grown an increasing awareness of the wonderful musical genre of which my father was a part.  Though he could not then have known it, Michael’s outreach was the catalyst for this extraordinarily rich personal growth, something for which I will always be grateful.

The birthing of this website was a gradual one, and several friends deserve both recognition, and the Walter family’s deep gratitude, for their support and contributions.  First and foremost, tremendous thanks and applause must go to Richard Behrens, a New England-based website designer and author (don’t miss his Lizzie Borden as girl detective mystery series!)  Richard initially proposed this site, and, without his countless hours of voluntary efforts (of both a creative and drudgework nature), it would not exist.  The talent and perseverance that Richard has brought to this project deserve far greater compensation than the Walter family could possibly provide, but, at the very least, this recognition, along with our heartfelt thanks, are due.

Frank Behrens, a New Hampshire-based writer and teacher who often lectures on American popular music, has provided charming and fascinating notes on the genesis and history of many of the songs in the Sheet Music section.

Thanks and recognition are also due to Eileen Parzek, a website designer and graphic artist who so graciously assisted Richard in creating the site’s artwork and structure; to Chauncey Michaels for his unflinching encounters with Dreamweaver Templates and his uncanny indexing abilities; and to Marc Reed for his ad hoc help in many areas of web development and graphic design.

Many technical thanks are also due to Andrew Johnson of the State University of New York at Stony Brook, whose generous assistance with the scanning of oversize materials (such as record albums and enlarged photographs) have meant that these are available to share.  Our gratitude is also due to Seth Winner, audio engineer (of Seth B. Winner Sound Studios, Inc., 2055 Whalen Avenue, Merrick, New York  11566-5320; 516-771-0028;SethBWinner@optonline.net), and Rob Geller, a San Franciso-based expert audio engineer, who have restored and transferred to CD, from fragile record media, much of Cy’s rarest music; to Roger Schore, for retaining and sharing of the Music Masters tapes of Cy’s music; and to Russell MacKechnie, whose kind energies in transferring that music of Cy’s, from analog cassette to digital CD format, has allowed these treasures to be enjoyed.

From a music, musical history, and personal perspective, we would also be remiss if mention were not made of the contributions of Chilton Ryan, Cy’s lyricist and a dear friend; James Gavin, a New York City author whose knowledge and writings on this musical genre are tremendous; Mark Eden Horowitz, pianist and Senior Music Specialist of the Library of Congress, whose diligent research unearthed long‑forgotten Cy Walter sheet music from the Library’s vaults; and Alex Hassan, Peter Mintun, and Frederick Hodges (each tremendously­‑talented pianists based in Falls Church, Virginia; New York City; and San Francisco, respectively).  These individuals’ respect for, and love of, Cy Walter’s musical artistry have served to keep his creative legacy alive; and in a very real sense, this website is a tribute to their concrete suggestions and support.

Finally, this website is ultimately created, and dedicated, to honor those of Cy’s family most responsible for his legacy, in particular:  his parents (Raymond Walter, a professional singer, and Florence Greaves Walter, whose signature triumph, as a piano teacher in Minneapolis for over sixty years, was unquestionably her son’s musical talent and career); and his widow, Cam Walter LaGennusa (1932-2010), without whose foresight these materials would not still exist to be shared.  With the unique perspective and knowledge she possessed of Cy’s career, Cam was also the source of numerous memories and  ideas, and gave unstintingly of her time and energy to ensure this project’s fruition.  As a son, I have been truly blessed.

So, courtesy of the Walter family, peruse, absorb, listen; and, above all, enjoy!